As Valentine's Day approaches, you may be looking for the key to your valentine's heart.  What could it be, gourmet chocolates, fine wine, jewelry, or BOARD GAMES.  Of course it's board games. In our continuing series of 2 player games perfect for some Valentine's Day fun, we feature 7 Wonders Duel & Skulk Hollow this week.

Starting off this weeks spotlight is 7 Wonders Duel.  Finally back in stock, one of our personal favorites, and with two available expansions, Pantheon & Agora, it is sure to be a favorite you'll return to many times.

Experience an intense two-player struggle for supremacy in the ancient world! Designed by Antoine Bauza and Bruno Cathala, 7 Wonders: Duel adapts the game play and excitement of 7 Wonders for one-on-one battles. Choose the Wonders you aim to build and guide your city through three Ages of drafting cards from cunningly shaped tableaus. Victory can be achieved in three ways: by invading your opponent's capital, by achieving a monopoly on scientific advancement, or simply by crafting the city that will earn the most victory points in the end. But be warned: only seven of the eight Wonders in play can be built. Will your city achieve greatness, or will your opponent prevent you from completing all your Wonders?

Add a divine element to your games of 7 Wonders Duel with the Pantheon expansion! Pantheon enables you to recruit deities from five different ancient Mediterranean cultures to become patrons of your developing city. Each god or goddess offers a powerful blessing such as fabulous wealth, military fortitude, or the means to thwart your opponent’s plans. Grand Temple cards make the game’s final Age intensely competitive by offering unprecedented points to you if you devote your city to divine concerns, and two new Wonders offer pathways towards victory by courting the favor of the gods.

In the halls of the Senate, decisions which shape the destiny of a civilization are made... and in the dark corridors of these same halls, conspirators work to further their own interests. This new 7 Wonders Duel expansion puts the spotlight on senators and their influence on the development of your Cities. Each competitor will try to control this influence in order to benefit from favorable decrees or call upon conspirators to try and change the situation.

Perhaps competing for the best city is not your style.  In that case you could try out asymmetrical tactical combat in Skulk Hollow.

Over generations and generations the ancient woodland of Børe prospered and grew. The world was bestowed with great spirit, which lifted the animals of the land to new heights. The Foxen grew proud and true. 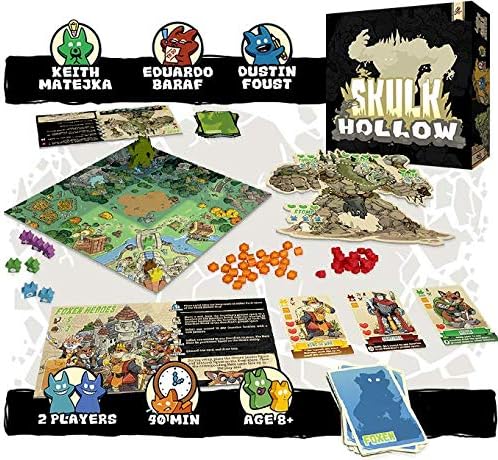 Then there was a monstrous shake and then The Great Return. No one quite knows why, but the Guardians have risen - but not the kind, life-giving Guardians of spiritual legend. Dark, ferocious, versions that are now attacking all the kingdoms of the land.

The guardian player wins the game either by eliminating the Foxen leader or by fulfilling the guardian's unique win condition.

The hero player wins the game by eliminating the guardian.

There are 4 Foxen Hero Leaders and 4 different Guardians to choose from.

Regardless of which game you choose you'll be on your way to Valentine's Day fun with either of these games.

This is a multi-part blog series.